Gerald Shtull (CPA, CA.| Licensed Damage Insurance Broker) received his MBA in 1971, and followed that up with becoming a CA in 1975. He spent the next 20 years in the import clothing industry in roles that included Controller and VP Finance, when his last job introduced him to the credit insurance industry in Europe.

At the time, the market was dominated by factors, while credit insurance was fairly unknown. Factoring was a method behind the times, where companies wanted to maintain control of the relationship, and collection of the account. Credit insurance allowed that and at the same time offered the protection from non-payment desired.

Gerald saw an opportunity and the rest, as they say, is history.

Gerald returned to the credit insurance industry in North America with the intent to do things better. He no longer wanted to work for another company, so became a broker and struck out on his own.

Today, Gerald Shtull & Associates is a major player in receivables insurance with more than 450 clients across Canada and outstanding policies covering nearly $10-billion in sales.

He credits (no pun intended) his success to a couple things, first, his experience in the needle trade.

“I understood the risk small and medium-sized businesses were facing because of my work as a financial officer. I could speak their language instead of approaching them as an ‘insurance man.’”

“I was sending in so many applications they asked me to slow down!,” he says. This might have been a perfect storm of hard work and being new to the credit insurance industry – without an idea of what was considered an average number of applications to submit each day, Gerald forged ahead, simply trying to get as many as possible.

In the process, he broke many sales records.

For the first 10-15 years, Gerald worked alone. While he was acting as the salesman for the company, the reality was that a large percentage of his time was spent on administrative tasks. He brought someone on to help, and eventually his sons joined the business – but don’t expect any special treatment. He asked them to learn the industry ropes first before joining the GSA team.

Almost 30 years later, at 76 years old, Gerald is considered a prominent leader in the industry, having been at the forefront of North America’s adoption of credit insurance for enterprises.

His direct involvement in GSA, though, is beginning to wane off.

These days his time is filled by “doing nothing!”, he said with a laugh – though the schedule he shared the day of our conversation begs to differ.

When he is truly not working, he enjoys spending time with family, especially his grandchildren – and enjoys watching sports and rom coms. Four-Five months of the year are spent in Florida.

From Humble Beginnings: The GSA Story 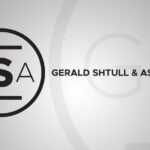